DJI Mini 2, 4K drone REVIEW 2023 everything you need to know, DJI has just introduced the Mini 2, the direct successor of the Mavic Mini launched a year ago. This tiny drone is here to fix a number of the shortcomings of its predecessor, but at the same time it maintains some of its advantages even though it no longer carries the Mavic name.

In terms of shape and size, the Mini 2 and Mavic Mini look very identical. But in terms of features and capabilities, Mini 2 fixes the shortcomings and limitations of its predecessor. DJI claims the DJI Mini 2 combines user convenience with a few touches while still maintaining the excitement of flying a drone as well as the safety system needed for novice drone pilots.

By design, nothing is significantly different. The DJI Mini 2 still carries a compact folding design, the size of the DJI Mini 2 is only the size of an adult’s palm and even weighs exactly the same as the Mavic Mini at only 249 grams.

This is quite important, especially in the United States where drones weighing more than 250 grams require special FAA licensing in order to fly outdoors, meaning that the DJI Mini 2 certainly escapes FAA regulations as a portable drone that can be taken anywhere without permission or license.

The DJI Mini 2 comes with improved Wi-Fi connectivity, using the OcuSync 2, which supports distances of up to almost 10km. The motor used for flying has also been upgraded and powerful. The duration of the DJI Mini 2’s flight is claimed to be up to 31 minutes with the speed to keep flying steadily in wind gusts with faster acceleration with a maximum speed of 35.8mph, an increase from 29mph.

It can withstand wind gusts of up to 24mph. The transmission system is claimed to make this drone fly more stable with a strong signal connection to the remote controller.

With the new OcuSync 2.0modes, you can control the Mini 2 from much further away than on the Mavic Mini. While the maximum range of the latter is 4km, it will further be controllable via a reliable HD video feed from a distance of 6 km in Europe or 10km in FCC countries such as the US and Australia.

This is due to the Ocusync 2.0 technology which is currently on the DJI mini 2. The technology supports the 2.4GHz and 5.8GHz frequency bands and automatically switches between them based on signal strength.

“If you have ever wondered what it would be like to fly around like a bird, well you no longer have to wonder. DJI FPV Combo drone that made that a possibility and let me tell it is truly an experience.”
You might also like
Today’s best sales. Find out

Keep in mind that this is the maximum distance. But in reality, you will reach distances of between 3 km-6 km in denser areas with lots of signal. According to the latest drone law, you are required to keep the drone within eye reach.

On the Mini 2, DJI uses simplified buttons and functions to keep things efficient and easy to understand compared to more complex drones. But like all DJI drones, the high-quality positioning sensors and visual sensors help the Mini 2 hover right where it is There is also GPS equipment, one of which is useful for assisting automatic landings.

For video recording itself, the DJI Mini 2 supports up to 4K 30fps resolution at 100Mbps and full HD 60fps. And besides JPG, the photo mode with 12MP resolution also supports the DNG RAW format, to auto exposure bracketing.

The camera sensor dimensions are still the same at 1 / 2.3 inch. Mini 2 includes a new digital zoom feature. There’s up to 4x zoom in Full HD, 3x zoom in 2. 7K resolution, and 2x zoom in 4K resolution. DJI claims the built-in 3-axis gimbal design can work without shock at all while flying.

RAW and DNG formats are formats for raw photo files. Both of them have a large size. The difference is that DNG is compatible with any device because it is Adobe’s proprietary image standard. To use it, how to install a codec from Adobe, then PCs and other programs can open DNG format files.

The First Taxi Drone Trial in Indonesia, Here’s The Result

“The name is Frogs 282, which means two passengers with eight engines, it is the second generation.”
You might also like

Not to forget that DJI also offers a new screen platform called Charging Display Case which is sold separately. This dome-shaped casing functions as a battery charging platform. The DJI Mini 2 fits into a shaped drone with a compact, easy and safe design, but still has advanced features such as 4K video recording, a more powerful engine, flying farther, and make the most of your travels.

The DJI mini 2 is a monumental breakthrough for the DJI and drone pilots worldwide, as its combination of weight, safety, performance and overall value provides an entry point for countless new drone pilots and enthusiasts.

I hope you found this article useful. If you want to read more about DJI drones, here is a selection of articles you might like: 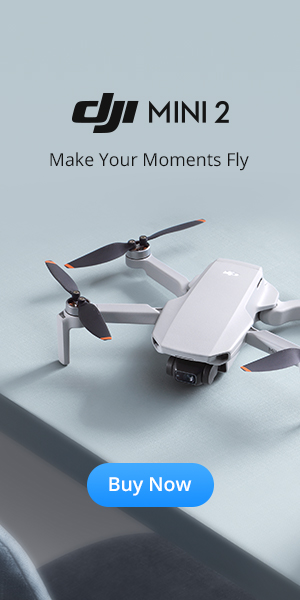 Garmin bounce price smartwatch for kids with LTE and GPS review. Garmin has launched a new smartwatch focused on kids…