Differences between DJI FPV drones vs conventional drones. Thanks to the DJI FPV Drone, with this sophisticated, smart and easy-to-use system. It’s able to minimize nearly every major problem pilots have had to deal with over the years. While offering an exhilarating and immersive flying experience. In this article, we will discover why the DJI FPV drone is so revolutionary and how it combines the best aspects of traditional drones and FPV drones in one extraordinary package.

A few years ago, experienced drone pilots had to assemble their own FPV drone and all the necessary equipment. FPV pilots must also practice flying for hours to ensure safe, confident flight and good footage. But now, the DJI FPV Drone has bridged that gap, even providing everything they need for beginners. With a variety of simplified tools, it’s possible to fly faster and record epic FPV footage right away.

What Is an FPV Drone? First, let’s understand what FPV really is. First-person view (FPV) drone flight is the easiest way to fly a drone. The pilot will be treated to a very immersive view from the perspective of the drone, which provides the true sensation of flying at high speed and dramatic maneuverability. This is like using FPP First-Person Perspective mode when playing PUBG games.

FPV vs NORMAL DRONES, Which One Is More Cinematic? So, what is the difference between DJI’s FPV drones and regular drones or other drones? In general, FPV drones differ from traditional drones in four main ways.

Let’s dive into each of these four points. However, this DJI FPV drone is able to provide a more optimal experience. Here’s why:

The DJI FPV offers an immersive experience that is truly difficult to match. DJI FPV Goggles V2 provides a super wide 150 ° FOV for stunning views. The new O3 transmission system ensures the image in the glasses is of high definition and extremely low latency, leaving users feeling as if they are actually in the air.

Finally, the new DJI Motion Controller, an accessory sold separately, gives pilots the option to control the flight with intuitive hand movements, making the DJI FPV even more immersive and unlike any other drone seen before.

The main reason FPV drones are more immersive than traditional drones are because pilots wear special goggles during flight. This provides a unique perspective that is not possible with ordinary drone flight. Where the pilot navigates by looking at the screen on a smartphone.

One of the biggest draws of FPV aviation is the flight itself. Pilots can enjoy high speed and limitless maneuverability as they pass through forests, under bridges, or around the cliff faces.

This drone can reach speeds of more than 200 kph (kilometers per hour), with acceleration that is also fast and precise. FPV drones also usually require a lot of practice before the user can fly. Whereas traditional drones are easy and intuitive enough to allow complete beginners to fly right away.

Conventional drones are easier to control and are equipped with many smart functions such as automatic takeoff, QuickShots, obstacle sensors and many more. While this function allows for easier shooting, it is not particularly fast or agile as it is primarily built to produce smooth videos and high-quality aerial photos.

DIY vs Ready to Fly System

Traditionally, FPV drone pilots had to assemble their own FPV drone and select the image transmission system and goggles separately. The general structure of this DIY drone is simpler for higher speed and greater flexibility.

Continue reading :  10 of the World’s Most Beautiful Waterfalls to Visit

However, there are major drawbacks, including builds that are often more fragile and less secure than conventional drones. Traditional drones are usually ready to fly and equipped with more sensors to ensure flight safety and stability. However, there are fewer customization and spare parts replacement options with this drone.

FPV Drones are thrilling, but easy to set up

The maximum speed of the DJI FPV drone is 140 kph, and it can reach 100 kph in just two seconds. It also offers unlimited maneuverability when flying in Manual mode.

But DJI’s FPV Drone also provides a series of control options that make it easy for anyone to use. The DJI FPV Combo comes with a standard remote control drone, which offers a traditional control experience with N mode, full FPV flight with M mode, and the new S mode.

The DJI FPV drone has a steep learning curve when it comes to flight. The controls take dozens of hours to practice, making them much more prone to crashes than conventional drones.

They also lack the features to help avoid collisions, which even the most basic drones currently have. Such as obstacle sensors, smart return to home, and more.

Everything You Need in One Box

The DJI FPV combines the flexibility of FPV with the ease of use of traditional drones. The plane is ready to fly right out of the box, with the drone, goggles and remote control connected.

All pilots need to do is charge the battery and follow the instructions in the DJI Fly app. The DJI Drone FPV also offers easy replacement options for parts, such as the top case, gimbal and landing gear.

The DJI FPV offers many of the advanced safety features that conventional drones have in addition to new emergency brake and hover features. With this, users can stop and hover in place at the touch of a button regardless of their flight mode.

The DJI FPV can also fly back to the starting point at the push of a button, and do so automatically or when the transmission signal is lost. 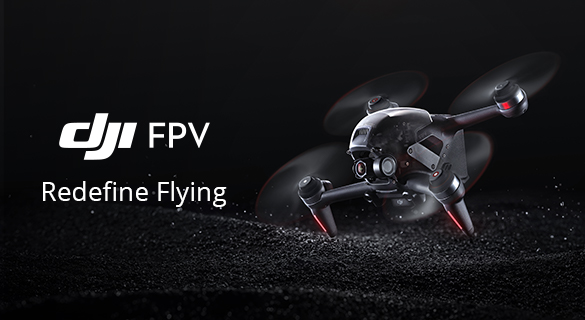 Is Switching to FPV Difficult? In the past, the transition to FPV drones was difficult for traditional drone pilots. While FPV flying offers an immersive and engaging experience, FPV pilots usually need to assemble their own drone and virtually practice flying before taking off in the real world.

“Featuring a telescopic extension pole and complete redesign the DJI OM 5 makes and ideal stabilisation choice for all filmmakers The OM 5 is now DJI’s best and most versatile smartphone gimbal”.
You might also like

The practice involves re-learning the basics of flight control and often results in multiple accidents before pilots get anywhere near their drone risk. Because of this, aspiring FPV pilots often worry about aviation safety, as well as the difficulty of assembling and controlling their drones.

Although enthusiastic about the immersive FPV flight experience, discomfort was a hindrance. To help users overcome many of the biggest hurdles in FPV flights while keeping the experience enjoyable, DJI developed an FPV system that is easy to use and ready to fly right away.

It offers the immersive flight experience pilots expect, as well as the ability to capture epic high-quality footage. The DJI FPV has taken some of the biggest advantages over traditional drones and applied them to this FPV system.

DJI even offers the DJI Virtual Flight app, which provides risk-free virtual flight training. These factors combine to reduce the worry for novice pilots. Keep in mind that the DJI Drone FPV provides a fun and more challenging flight experience.

That’s some information for the DJI FPV Drone which has incredible maneuverability and speed. Interesting travel plans after coronavirus restrictions crisis ended. Corona pandemic, which is currently sweeping the world has a significant impact on various sectors. One of the most affected is the tourism sector due to travel… The most popular sailing destinations in the world – sail the ocean to an exotic vacation spot. If you are considering joining the experience of exploring new places through the waterway, there are cruise destinations… Riga, Latvia travel guide: reasons why you should visit. Latvia is a republic located on the Baltic peninsula. The country of Latvia is surrounded by Estonia, Russia, Belarus, Lithuania and the Baltic Sea. The country… The top 10 most unusual and unique hotels in the world for your vacation. Traveling is one of the most fun and educational things a person can do. The best part of traveling is getting… Visiting Bali will make you even more excited because there is Nusa Penida there. Nusa Penida who is still a “virgin” has so much unique natural beauty that should not be left alone. You must… 10 of the World’s Most Beautiful Waterfalls to Visit

BALI by Drone | NUSA PENIDA MOST BE... x